Skip to content
How Continuous Improvement may continually continue?
26 November 2008 by Xavier Perrin

It has been about thirty years that continuous improvement (kaizen) has first started being discussed. In many companies though, kaizen is still considered a management “option”. Operators and employees are not involved in the continuous improvement of performance. Kaizen actions are then led by production, quality or maintenance departments. In other cases, kaizen is considered a really efficient way to increase performance. People are trained, a process is set up (often 5 S, TPM, reduction of the cost of quality, shortening of lead times…) and improvements are achieved. But one of the biggest issues is to make it sustainable. Too often, when I’m visiting factories, I see disused kaizen spaces, where the indicators displayed on kaizen walls are yellowing since they aren’t updated… Most of the time, people who were once involved in these processes are disillusioned, if not ironical or clearly negative, when they speak about it. So, how continuous improvement may continually continue?
What can be done in order to make kaizen a permanent process for the company? The analysis of the successes and failures of continuous improvement initiatives in the companies I’m familiar with allowed me to shed light interestingly on the conditions of sustainabiliy. They are summarized in the following chart: 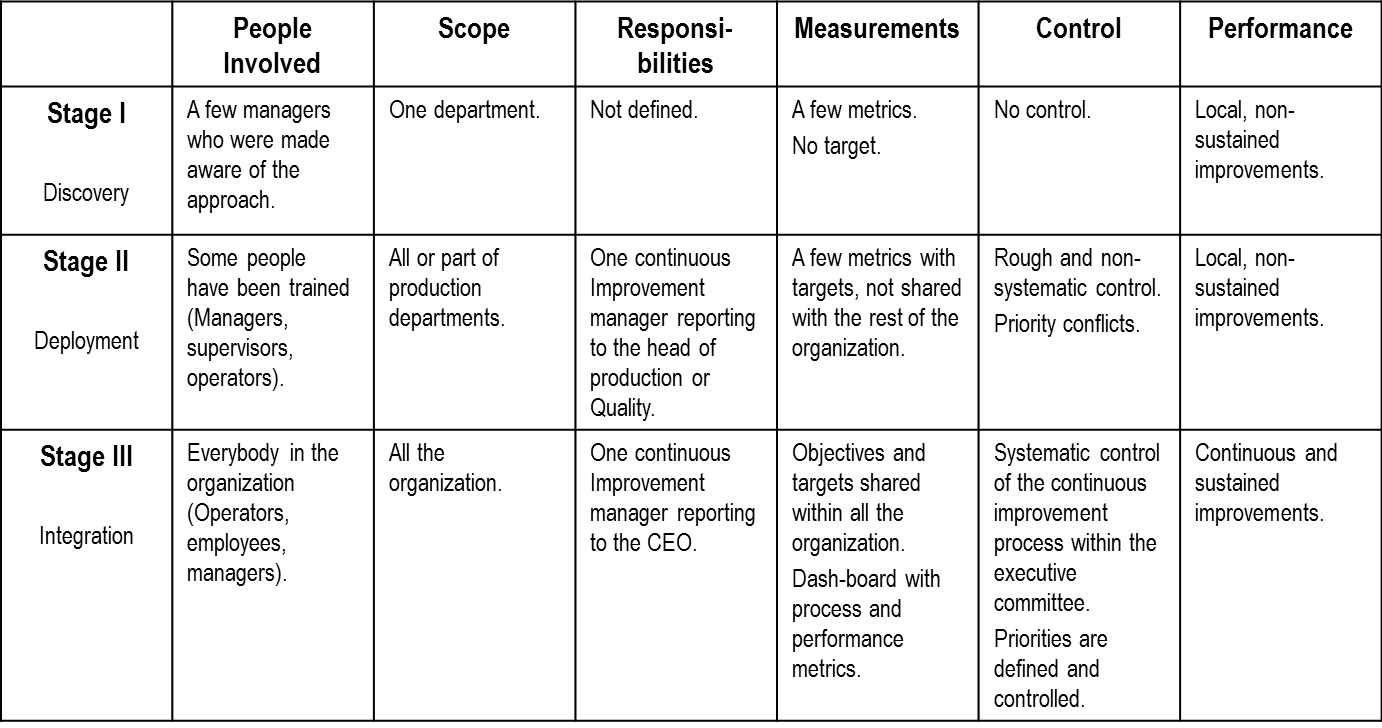 Stage I: Discovery
One of the company’s managers (Generally production or quality manager) strongly believes in the relevance of the kaizen process: she/he experimented it in a previous employment, or she/he learned about it during her/his studies or during a professional training. She/he then takes the initiative to start a process in a limited area. Performance indicators are set up to evaluate the effectiveness of the improvements. In some favorable cases follow-up meetings are scheduled. However, they are often postponed due to resource priority conflicts with daily operations. There is no real management of the process. At that stage, spectacular improvements are generally made but that are not sustained.
Stage II: Deployment
Improvements in the discovery stage convinced the board and other managers to deploy the continuous improvement process. A kaizen manager is designated, who is usually reporting to the manufacturing or quality manager. Ambitious training sessions are planned for most of the managers and employees of the departments where the process is initiated. Improvement targets and corresponding metrics are set up. However, the control of the kaizen process is rough and not systematic. Regular meetings are often postponed because of priority conflicts with daily operations. More improvements are observed than during stage I, however, they are still precarious… They aren’t made sustainable. At that stage, kaizen isn’t integrated as a vital activity of the company, just as it is for financial management for instance.
Stage III: Integration
The integration step means that the company’s managers consider kaizen as a vital activity of the company. It is thus assimilated to other important functions. The continuous improvement manager reports directly to the CEO and is a member of the executive committee. The goals of kaizen activities are defined and approved by the executive committee. The continuous improvement manager reports the improvements achievements to the board.  The continuous improvement dashboard allows following up performance improvements. Possible priority conflicts with other projects or daily operations are discussed and arbitrated by the board. Ambitious training programs delivered by internal resources to all managers and employees support the deployment. Performances improve regularly and systematically. The company gains market shares and reaches the performance of world-class competitors.
You can now confront your company’s approach to this typology, and then consider what is still to be done to make continuous improvement continually continue.
Next article How do we waste our teams' intelligence and energy?