Future is only present that should be put in order. Your task is not to foresee the future, but to enable it.(Antoine de Saint-Exupéry)

The S&OP meeting you’re attending to today has been scheduled a year ago: you planned your agenda of this week depending on this obligation. Beyond the fact that you have to be there, this meeting is so important to you that you wouldn’t miss it for the world. Everybody is on time. Your colleague Emmanuel, Supply Chain Manager, quickly recalls the agenda for this 2 hours long working session. He starts showing and commenting the performance indicators enriched with last months’ figures: evolution of actual demand versus planned demand, evolution of actual production versus planned production, evolutions of inventories versus goals. Indicators regarding quality and productivity are commented too. Each manager related to these indicators explains, if needed, the main action that has been decided to correct the gap between actual figures and goals. Pierre, CEO, who never misses a meeting either, analyzed all these elements before the meeting. He now questions all the participants to assess the robustness of the actions that have been initiated. This point is quickly dealt with today: almost all the indicators are green. Emmanuel moves on to the next point on the agenda: in the portion of the horizon which is covered by the MPS’ horizon, he comments the gap between the sum of scheduled production in each product family and the corresponding production plan that have been decided in previous S&OP. An unusual gap is noted for one of the families: the cause is an outstanding order which required the scheduling of additional productions. The issue has been addressed during the last MPS meeting, and the required capacity has been set up thanks to the reassignment of multi-skilled operators and overtime. Again, the CEO steps in to challenge the decisions and assess their robustness. He is shortly convinced by Philippe’s specific answers (Philippe is the Production Manager), which are supported by Marie, Controller, and the additional comments of Nicolas, Sales Manager, who kept a close eye on this case.

Now the meeting has started half an hour ago. Emmanuel introduces the next point: the review of the scenarios which have been set up and valued for each product family during the pre-S&OP meeting that took place about one week before. The subject matter is the horizon beyond the MPS one. For one of the products families, the sales plan had to be revised downward compared to the previous S&OP meeting: actually Nicolas learned lately from a business engineer that one of the main customers is three months late in starting a new product line, so his needs have been postponed accordingly. Thus Nicolas asked for the sales plan to be revised. Two scenarios have to be considered. The first one consists in keeping the production resources as they are, and in creating inventories until the customer needs the products. Philippe favors this option so he doesn’t have to cut down his temporary workers just for three months, and to hire them again later on. The consequences in terms of poor quality costs and loss of productivity would compromise the chances to reach the goals set for the production department, said goals being notably ambitious to face up the competition. On the other hand, Marie supports the option where the headcount of temporary workers would be reduced since the consequences of increased inventories on the working capital needs would be more dramatic, according to her, than the fact that the productivity goals could not be reached. The discussion is heated, both parties defending their stance. Finally, Pierre steps in and suggests the following: Philippe can keep his headcount for three months to the condition he speeds up the work-in-process and lead time reduction project he’s in charge of. The reduction of WIP would then impact a longer period of the fiscal year, and would make up for most of the temporary augmentation of the finished products stocks. Emmanuel, who took the initiative of the lead time reduction project, supports this option, as well as Hélène, the Human Resources Manager, concerned about the stability of the headcount. Marie joins this option too, aware that the impact of a significant decrease of WIP would be more lasting.

The debates go on like this for all the other products families. Scenarios are examined, discussed, and then decisions are made and noted.

The meeting ends on-time. You know that the report will be available as soon as tomorrow in your mailbox, with all the noted decisions. Then, you will be able to comment it to your quality department’s team, and to plan with them the missions handed over to your team for the coming months.

This description doesn’t really sound like what you are used to live? In that case, this could look like this:

Your smartphone’s alarm reminded you one hour ago that the S&OP meeting would take place today. It isn’t very convenient, seeing this week’s very busy agenda. Plus, this meeting… You really wonder what it is for! Every time, it turns into a fight, and very little comes of it… You go to the meeting’s room reluctantly: you’re late… No need to be worried though: you’re the first to arrive. You open your laptop for answering your emails while waiting for the other participants. The colleagues that arrive do the same while you all wait for Emmanuel, the Supply Chain Manager, who is in charge of leading the meeting. It only takes about 10 minutes: here he comes. He announces that Pierre, the CEO, won’t attend to the meeting: he had to go see a customer who convened him in order to present a recovery plan for all the orders that are late.

The meeting finally starts with the presentation of last month’s figures. Quickly, the conversation gets more heated: the figures are contested. Philippe, Production Manager, objects to the increase of backorders presented by Emmanuel: according to him, a third of the delayed deliveries are orders for which the sales department allowed infeasible deadlines. This remark angers Nicolas, Sales Manager, who reminds that if the boss has been convened, it is because there is actually something wrong… Philippe answers that it is impossible to comply with the delivery ates anyway because of the length of the list of missing parts due to the suppliers. Hélène, Human Resources Manager, whispers to you: we’re lucky Gérard is on a business trip! (Gérard being the Purchasing Manager) It would have been a hell of a session!

So the struggle goes on for long minutes, without any decision being made. Watching the time fly by, Emmanuel decides to move on to the next point on the agenda: the production and delivery goals for the coming month. Quietness lasts only to the moment when Emmanuel presents the targets for the coming months. Philippe is the first to talk: “Emmanuel, you know your figures don’t mean anything: you show us volumes by product families, global resource requirements… I already told you many times before that we need more details: quantities for each reference and loads for each machine.” The debate starts again, stronger than ever, when Nicolas notes that those production targets will actually lead to an increase of backorders: he is clearly angry when he announces that he actually has to go and negotiate an important deal the coming month, and that he is going to have to tell the customer that delayed orders won’t be reduced at the end of the month, and on top of that, they are actually going to increase… You just step in at that time to say that your team had to reject a batch of components that weren’t compliant, components that happen to be mainly used for the customer Nicolas is going to visit… At least, all the protagonists calm down when they hear the news! More than an hour will be needed for all of them to, at last, approve the goals for the coming month – without said goals satisfying any of them! And the meeting started more than two hours ago… Emmanuel, already exhausted, suggests moving on to the last point on the agenda: the examination of sales, production and inventory plans for the next 12 months. Philippe is the first to speak out: “We’ve been around this table for more than two hours. We hardly manage to agree on what to do for the upcoming month, so why bother talking about what is going to happen in one year?” Hélène takes this opportunity to say that she has to leave because she has an interview with one of the staff representative in 5 minutes. Actually, you have to leave the meeting too: you have to take part in a conference call with the Quality Manager of the supplier of the non-compliant lot in question. Emmanuel, obviously annoyed, announces the end of the meeting: “For the rest of the horizon, I’ll figure it out by myself then see with Pierre…as usual.”

If your S&OP meetings look like the one first described, it is because your company set up a relevant and solid planning process. The emphasis should then be on continuous improvement of the process and also making it sustainable.

If they look like the second example, the situation is worrying. Indeed, the consequences of an ineffective planning process are serious, first of all for your customers. The service level is highly determined from the balance between load and capacity. If they aren’t identified soon enough, imbalances aren’t resolved properly and short terms efforts and expediting usually aren’t enough for on-time deliveries. Sometimes, the service level is safegarded, but at premium price: overtime, unplanned subcontracting, and extra freight costs for compensating time wasted during the supply process. The consequences are also disastrous when it comes to inventories, with the paradox of having both excess inventories and a very low service level.

In the second example, the S&OP process has been thought as a standalone process. People tried to set it up based on the good practice we find clearly documented in books or good trainings, but they forgot that this process is only relevant if it is integrated with a pertinent and robust MPS process. Obviously, our example shows that the MPS process is deficient or even lacking: the S&OP meeting only evokes short-terms issues (next month deliveries) and the Production Manager complains about the lack of details. Actually, the detail level of S&OP (volumes per families, resources requirements) doesn’t address MPS issues (mix, rough-cut capacity planning). The way these two planning levels should be integrated is shown in the following diagram: 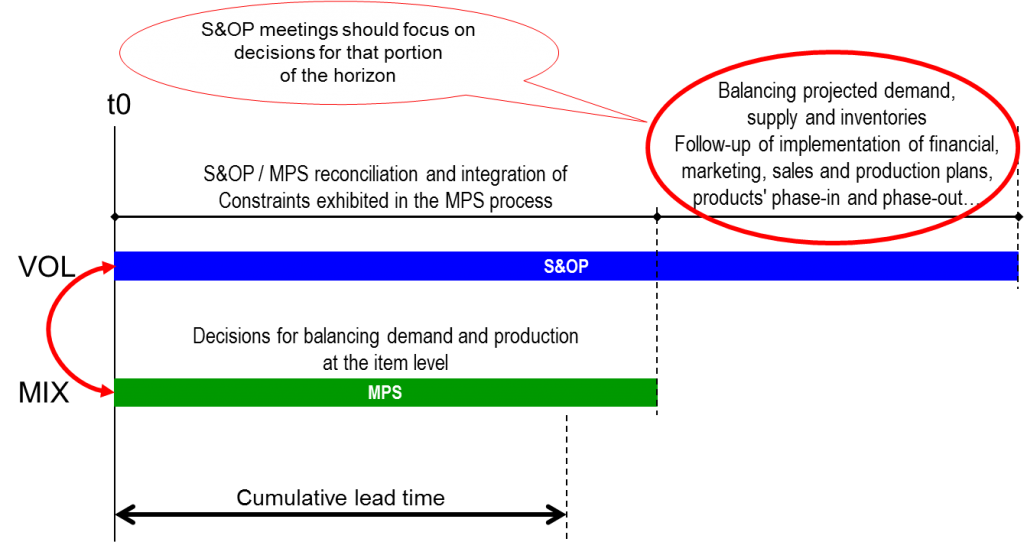 To conclude, if your S&OP meetings look like the second example, it’s your whole planning process that needs to be reexamined. It is a company project that needs to be sponsored by your CEO.

The following links can be a first step since it helps the members of your board to get started on the subtleties of S&OP:

Next article Some Key Questions Before Buying an ERP

I was reading through your blog this morning and really liked the article on S&OP meetings ( http://www.consulting-xp.com/blog/?p=567). I am an avid reader of supply chain and S&OP information and you have done a great job on this article summarizing how most meetings end up going.

You gave two good resources at the end of the article and I wanted to add another for your readers. It is an S&OP checklist that could be of use

Check it out, I think it’s a great fit.