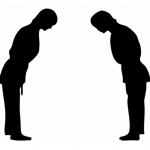 Many articles, mostly related to lean principles, insist on “respecting people” as a necessary behavior of managers and leaders. This is often highlighted by quoting Toyota’s leaders, like former president Fujio Cho and is famous slogan “Go see, ask why, show respect”. Showing respect sounds obvious for most of leaders, especially for those who consider a humanistic style of management, that is, an approach of management not only centered on company’s results, but also on developing people’s well-being. “First we build people, then we build cars” is another famous quotation of Fujio Cho. However, there is always a large gap between belief and action! And meeting real respectful leaders isn’t so common, even among those who claim they respect their teams.
A few months ago, while I was visiting a factory accompanied by the Production Director, I was asking him for details about one specific operation. As he couldn’t answer specifically, he moved to an operator, greeted him, and introduced me. I started a discussion with the operator. He provided all the details I asked for. The more questions I asked, the more he seemed proud of his knowledge and skills. The director was very pleased that I could get the information I needed. So he quickly left us to wait in the alley where he began to check his emails on his smartphone.
Whatever his opinion about respect, the specific message he addressed to the employee was: “thanks for helping the consultant, but it’s of no interest for me and I have more important things to do”. Even if he was polite and seemed respectful, he actually showed his employee that he would have wasted his time listening to him. Is it really respect? Moreover, by ignoring this discussion, the director lost the opportunity to get invaluable information about what really happen in the place where things happen (on the gemba). “Go see…”, the words of Fujio Cho, means the best way to catch relevant information is going to the gemba, looking by ourselves to real things, not by reading reports and dashboards.
Another similar situation is when engineers or technicians are requested for solving a quality or productivity issue. In the worst case, they meet in a meeting room and try to identify the root cause from data compiled in a spreadsheet. There is little chance to identify the root cause by such a practice. A better way is when they go on the gemba, like police inspectors trying to identify the culprit of a crime, looking for any clue which could help understanding the cause of the problem. Nevertheless, sometimes it happens that our investigators ignore people working in the area. They think that it’s their mission to tackle problems, not the one of operators. Such a behavior is terrible for the operators: how can they feel respected by people who even not imagine that they could have any idea about the issue? Yet, they spend all their working time with machines, tools, methods, and materials. In fact, they have a great expertise about what is going on in the area, but this knowledge isn’t recognized. But, recognizing the expertise of operators isn’t enough: it is also necessary to conduct the discussion in a way which doesn’t influence the perception of people. That is, not raising any interpretation of the situation which could be considered as a truth by operators. Instead, a recommended attitude is to ask “why” several times, guiding the reasoning of all present people towards the root cause of the problem: “Go see, ask why…”. By doing this, the risk is that people could feel uncomfortable by such insistent questioning. This is the reason why it should be conducted with a kind and respectful attitude: “Go see, ask why, show respect.”
In conclusion, respect should not be considered only as a value or principle. It is primarily the way we are really acting, our attention and listening with the sincere objective of understanding facts and people’s emotions.

In conclusion, respect should not be considered only as a value or principle. It is primarily the way we are really acting with others, our attention and listening with the sincere objective of understanding facts and people’s feelings.

Next article Client is King. Really?