Skip to content
Do you really pull your production?
27 April 2020 by Xavier Perrin

When I am working with High-Mix / Low-Volume (HM/LV) manufacturing companies for helping them to improve their dependability, reduce their lead times, and reduce their working capital need, a frequent misunderstanding comes from executives about pulling production from customer demand. As they produce only what their customers are ordering, they believe that their production system is a pull system. In the same way, when I am teaching Supply Chain Management principles, lot of attendees think that push system is synonym of MTS (Make-To-Stock) and pull system is synonym of MTO (Make-To-Order). These misunderstandings can lead to poor choices regarding the development of supply chain and production systems. As most people associate “pull” to “lean”, many managers of MTO manufacturing companies think they already adopted the lean approach since they produce only what customers ordered. Similarly, some managers in MTS environments think that in order to adopt a “lean” approach they should eliminate finished-goods inventories and only produce to orders. In both situations bad decisions will eventually be taken. So, it seems necessary to clarify the principles of push and pull systems. Both terms are used in two different areas.

In production with a push system, production is scheduled with a planning system (Typically the Manufacturing Planning and Control module of an Enterprise Resources Planning system – ERP). Each workstation is then producing according to its specific schedule and pushes its production towards the next workstation. 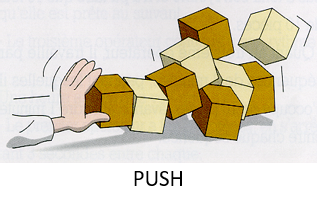 In a pull system, each workstation receives signals from the downstream “customer” workstations and produces only what is requested by those signals (so called “kanban” in Japanese). 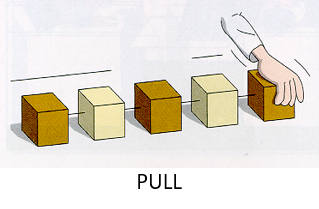 In production, push system aim to maintain a high utilization of resources for limiting production costs. Work-In-Process (WIP) build up between workstations without any control. As WIP is not under control, lead-times are not either. On the other hand, in a pull system, the amount of inventory is defined in the first instance and the utilization of workstations is a consequence of actual demand from downstream workstations. The goal is to control WIP and lead-times. The issue of productivity is not addressed by the increasing of utilization, rather by the identification and elimination of non-value-added activities.

Even though MTO factories only produce what their customers order, most of them actually push their production! Work-orders are created and released once the corresponding customer-orders have been recorded. Then, the main task of “schedulers” is to chase these orders, define and update priorities daily in order to meet delivery promises and to reach revenue targets. WIP is not controlled (In fact it is not even measured!) and tend to increase constantly, with the effect of continuously increasing actual lead-times… And “Schedulers” (Wrote in quotes as they do not perform any scheduling task in that case) react to this situation by updating priorities and being taken into a vicious circle : increased WIP and lead-times necessitate more priority changes to the detriment of real scheduling tasks (scheduling of operations, balancing of load and capacity, and resolution of other issues which impede production…), which create higher WIP, and so on. This is all but pulling production!

In fact, implementing pull in MTO and HM/LV environment is not so easy. One of the reasons is that literature and lean courses primarily address implementing pull in MTS and LM/HV environments. Once in a high variety, complex job-shop situation, with complex routings and high variety of cycle-times, well known lean tools like line balancing, supermarkets, and specific kanban loops are not appropriate. First, it is necessary to understand the value-streams with the help of the Value-Stream-Mapping method. Drawing VSM in such complex environment necessitates a specific approach. Then methods and techniques like One-Piece-Flow, FIFO Lanes, DBR (Drum-Buffer-Rope from the Theory of Constraint) or ConWIP (Constant WIP) possibly with the help of generic kanban cards allow to pull production. But the most difficult issue is to adopt new metrics, and new behaviors, for monitoring production activities and leading teams: Throughput-Time, Actual WIP against standard WIP, day-by-the-hour production, etc.

In conclusion, push and pull production systems are definitively not related to the manufacturing environment. In particular, Make-To-Order does not mean pulling production. Implementing pull in such environments is not possible only by adopting “classical” lean tools. It is necessary to learn and implement other methods from the lean approach and the Theory of Constraint.

Next article Just-In-Time Swept by COVID-19?