Skip to content
Generic Kanban: How does it work?
14 January 2014 by Xavier Perrin

This article is dedicated to Keith FitzPatrick and all those passionate people who are taking part to the discussion initiated by Keith on the APICS Group on LinkedIn : “Kanban to the masses… not for beer drinking though!”
Kanban is a well-known and powerful method. Kanban is the tool which is needed to implement a pull system. The most popular kind of kanban is “specific” kanban, where the signal (generally a card) indicates that the downstream process needs a container of a specific part. This form of kanban is appropriate in low mix / high volume environments. Fortunately, kanban isn’t restricted to these environments. It is possible (and desirable) to implement pull systems in high mix / low volume environments. Provided we use the appropriate form of this powerful tool. In such situations we use “generic” kanban cards.
Generic kanban means that the signal (kanban) authorizes production without specifying what to produce. Imagine a value-stream in a high mix / low volume environment. Hundreds or even thousands of references could be produced in the value-stream. Currently, the production control department issues daily dispatch lists for defining priorities at each work-center. Thus production is pushed in the value stream and huge WIP are built between each process step. Queue-times aren’t controlled as well as manufacturing lead-times. This situation is illustrated by the following picture: 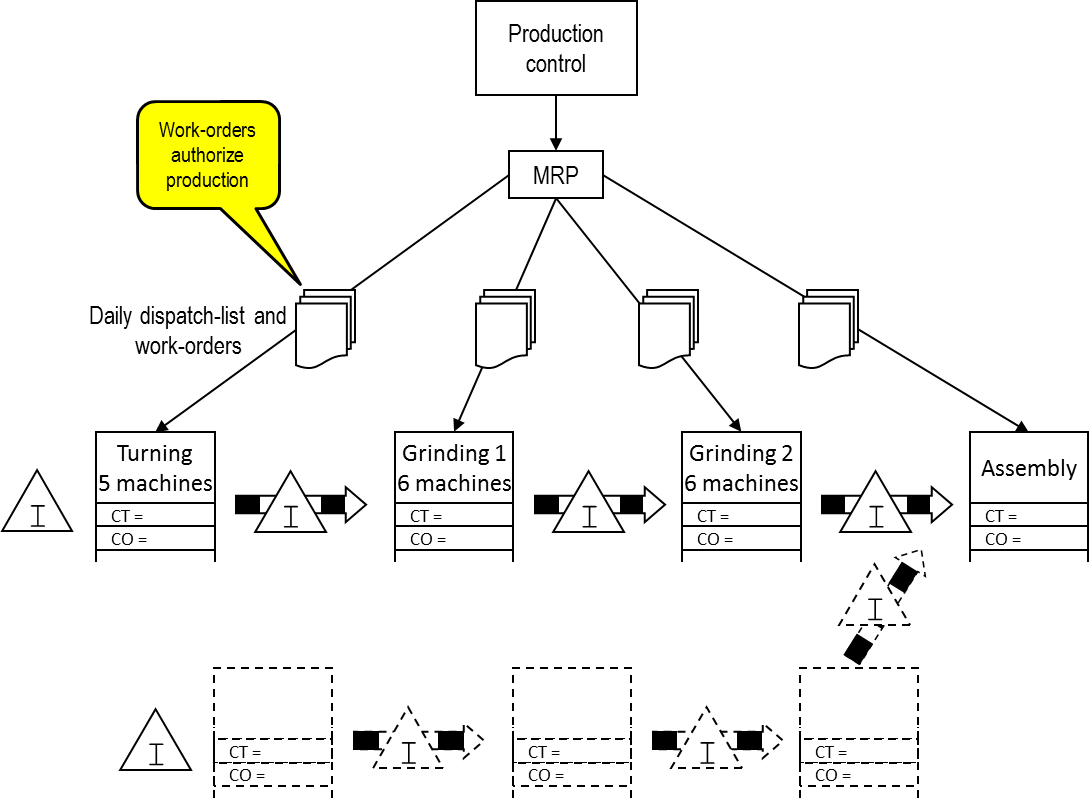 How to improve the flow is such an environment? How to pull production? Generic kanban can be the solution as it allows controlling the flow of orders along the value-stream. Typically, generic kanban allows setting a pull system between process steps. One of the process steps is surely the bottleneck. This bottleneck should pull production from upstream process steps. A kanban loop is set between the bottleneck and the gateway process. Let’s start from the bottleneck. One kanban card is associated to each shop-order and it is placed in the shop-packet. Once the order has been processed on the bottleneck, the card is removed from the shop-packet and it is returned back to the gateway process where it is placed on a kanban board. The rule is that the gateway process is authorized to start a new order only when a kanban card is available on the kanban board. Priorities are still given by the dispatch list. Once the operation on the gateway process is completed, the card is placed in the shop-packet and stays in it until the bottleneck process has been passed. In a push system, the only information used for authorizing production is the dispatch-list and corresponding shop-orders. In a pull system with generic kanban, two pieces of information are needed for authorizing production: one shop-order and its relative priority in the dispatch list AND one kanban card. See the value-stream on the next picture: 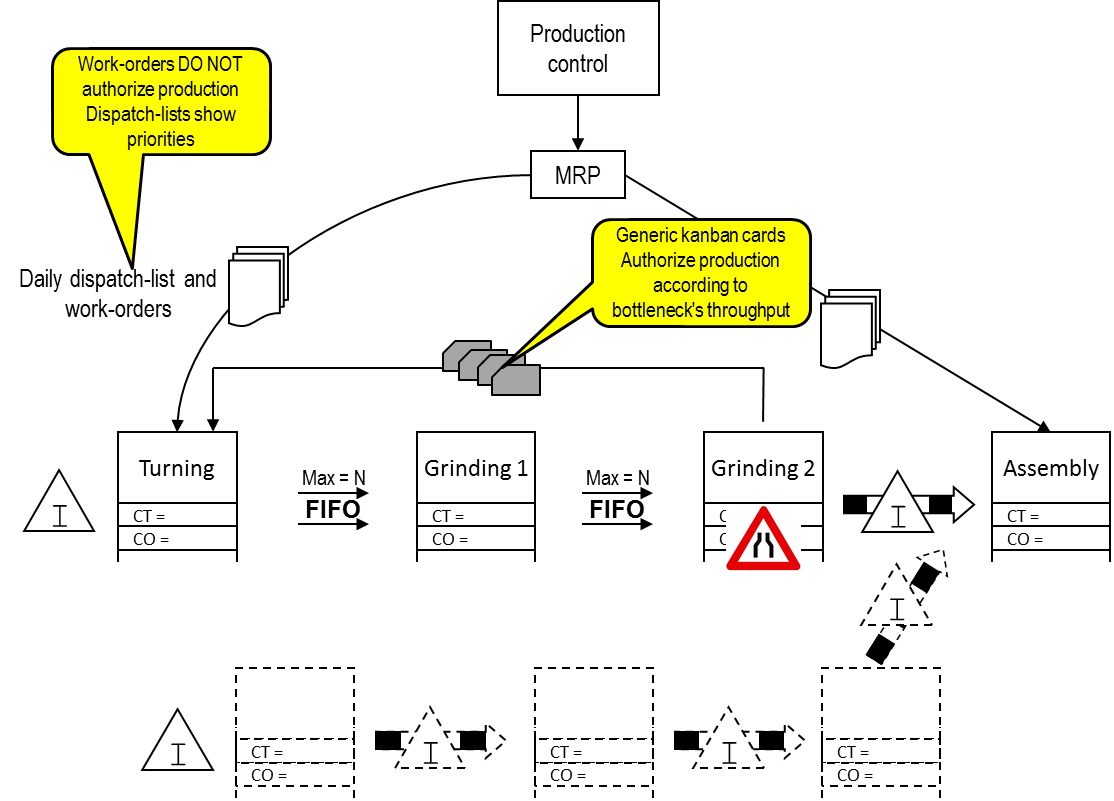 The following picture shows a kanban board for generic kanban. In the example above, the board should be placed near the turning process: 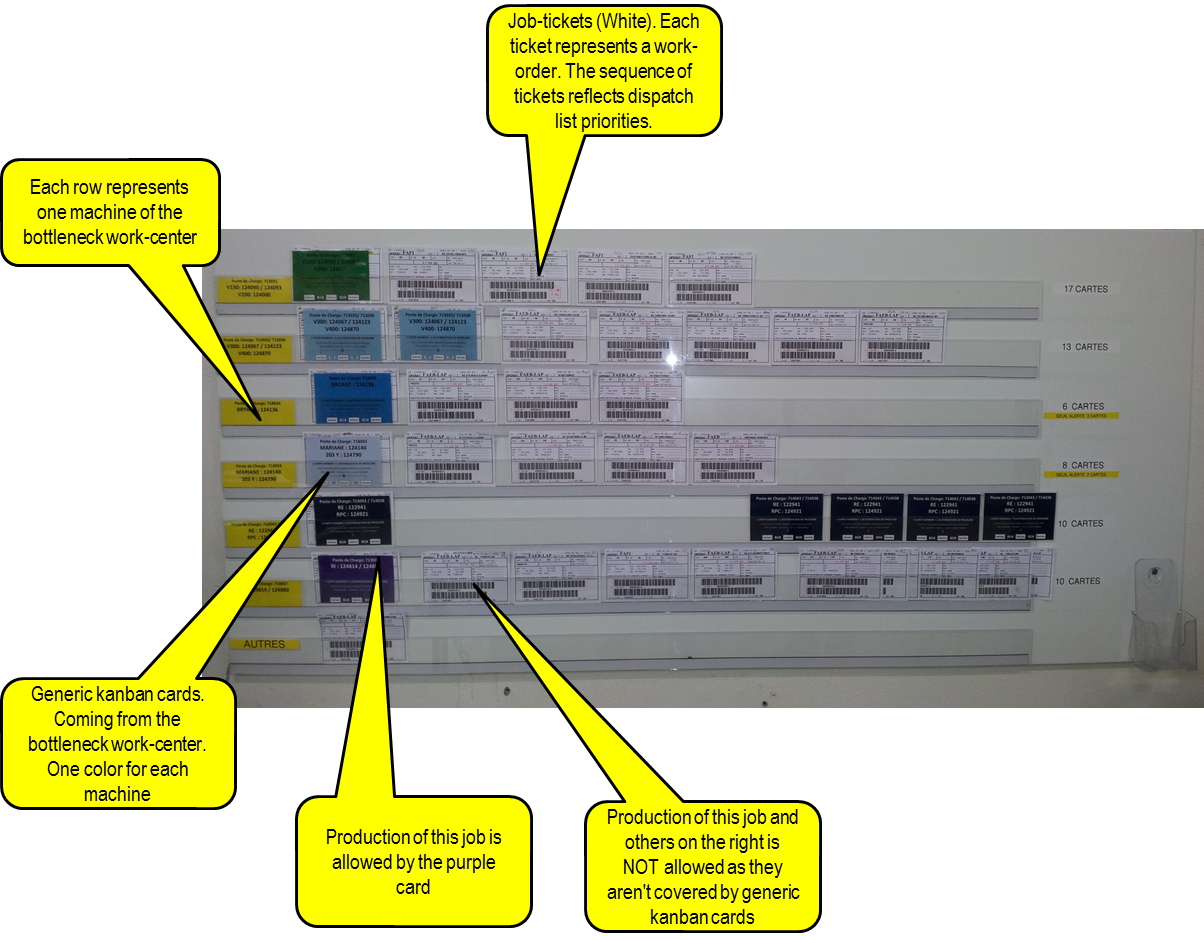 The next picture shows a container somewhere between the turning process and the grinding 2 process (bottleneck). 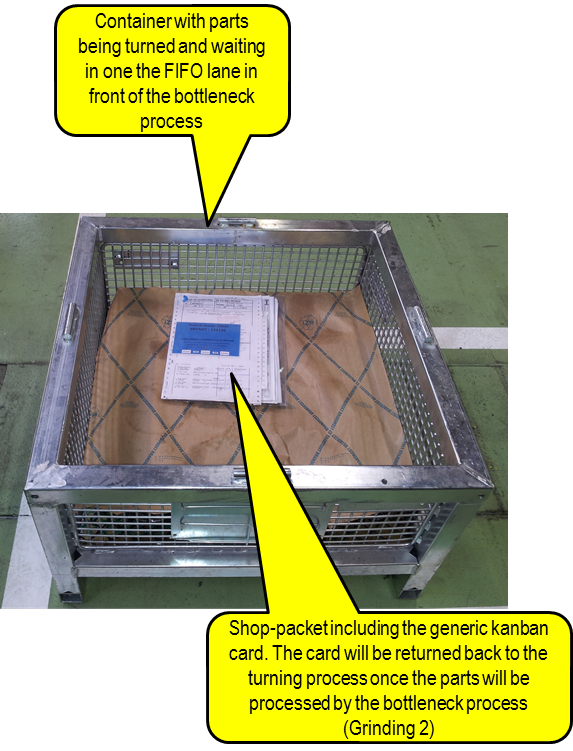 Note that generic and specific kanban (for high runners) can work together in the same value-stream.

Note also that generic kanban is an appropriate tool for implementing the TOC’s DBR principle.

Previous articleWhat is the point of SMED?

Next article Kanban: 4 Traps To Be Avoided